Birkenstock device mark doesn’t get a foot in the door 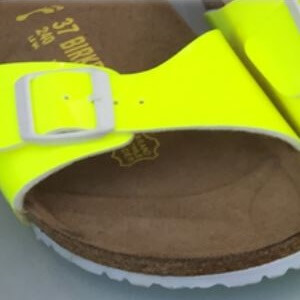 The German shoe brand Birkenstock is mainly known for their sandals having the unique, anatomically shaped insole. The company had registered the depiction of the pattern of the sole of their shoes as a Benelux device mark. An attempt to have it registered as an EU trademark as well, failed, however.

Not a trademark but a surface pattern

The European Union Intellectual Property Office (EUIPO) refused Birkenstock’s application. The EUIPO found that the device mark had no distinctive character and merely was a representation of a surface pattern. After competitor Footsie brought invalidity proceedings, the Benelux trademark was also partially nullified for those reasons. Birkenstock subsequently appealed this decision.

The Court of Appeal also found that the Birkenstock device mark should be considered a surface pattern. Using a surface pattern with simple shapes and lines is after all common for (parts and accessories of) shoes. In addition, the depicted square is merely a cutting of a repetitive pattern that can be used indefinitely in all four directions.The public will therefore not consider it a trademark.

The most important function of a trademark is the indication-of-origin function. This means a consumer must be able to distinguish the goods or services of the one manufacturer from those of other manufacturers. This results in a trademark having distinctive character.

In principle, the requirement of distinctive character applies to all trademark types and is assessed the same for all of those trademark types. However, for some trademark types – including for instance shapes and colors – it holds good that it will be more difficult for the public to perceive them as such than they would signs such as words or logos. The Birkenstock device mark consists of the appearance of (a part of) the product. In order to have distinctive character in such a case, the sign must significantly deviate from the standard or what is common in the industry in question. As it happened, this wasn’t the case for Birkenstock.

The trademark protection threshold for trademarks the indication-of-origin function of which is not self-evident, is high. However, the requirement of significant deviation from the standard does not always apply. This, for instance, applies for so-called position marks. A position mark describes the combination of the image and its position on the product. In practice, this means that in the trademark application the contours of the sign and the location where the trademark is to be placed on the product, must be indicated in dotted lines. Had Birkenstock filed their trademark application as a position mark, they could have circumvented the requirement of significant deviation and then there would quite likely have been a matter of distinctive character indeed.

Late 2021, the Court of Appeal of The Hague ruled as follows:
“The average consumer is not used to deriving the origin of the good from the appearance of (the packaging of) the good. […] That is why a trademark consisting of the appearance of (a part of) the good itself, only has distinctive character if it significantly deviates from the standard or what is common in the industry in question. Only then can such a trademark fulfil the essential indication-of-origin function.”

The Court of Appeal continues:
“The Birkenstock trademark consists of a graphic representation of repetitive horizontal and vertical undulating lines having the same shape and intersecting each other such that a regular and repetitive pattern is created. The trademark has a square shape, but it lacks a box or outlines. As a result, the impression is given that the depicted square is merely a cutting of a repetitive pattern that can be continued indefinitely in the four directions of the square and therefore can be used on a surface, as a result of which it is particularly suitable to be used as a surface pattern.”

If you have any questions about registering your trademarks, our trademark attorneys will be happy to help you.